Median age, which is a metric provided with each year’s population estimates on a national, state, and county-wide level, can serve as an effective proxy to aid our understanding of an area’s age profile. Here, we’ll take a look at why it’s so useful, national and statewide trends, as well as what the median age looks like within our own region.

Why use median age?

Simply stated, the term “median age” represents an age value that divides the age distribution of a specified geographic area exactly in half. This means that precisely half the residents of a given geographic location are older than the specified median value, while the remaining half of the residential population are younger than the median value. Therefore, if the median age calculated for the United States is 38 (as it was in 2017), then exactly 50 percent of Americans are over the age of 38 while the remaining half are younger than 38. A higher median age estimated for one location, when compared to another location with a much lower median value, would indicate a higher concentration of “older” residents in the first area when compared to the area associated with a younger median value, and thus a slightly more youthful population.

Although it is sometimes useful to compare the complete age distribution of residents across geographic areas, which can include single-year age counts (18-year-olds, 19-year-olds, etc.) or grouped counts (e.g. 65-years and older), it is often more effective and less time-consuming to compare areas using a single metric, much like the median age. Using this more simplified measure of an area’s age profile allows us to compare the age distribution of different populations across many geographic areas at once, essentially informing us which locations yield higher concentrations of youth relative to their aging populations. However, the median age cannot tell us why an area might be associated with a more youthful residential population, or in contrast, an aging residential population. Some geographic areas may be associated with a higher median age simply because they serve as popular retirement destinations, attracting a higher concentration of older residents relative to their youthful populations. Or, a lower median age could simply be the result of an unusually large number of births occurring in an area in recent years, essentially dragging the median age down in conjunction with the observed “baby boom.”

On a national scale, following a similar trend observed in many states, the median age in the U.S. has continued to rise in conjunction with the aging of the Baby Boomer generation. Considering that this generation is associated with a particularly large cohort of births observed for any period of time, the trajectory of the median age across the U.S. has continued in a positive direction since the turn of the century. Indeed, the median age in the U.S. was estimated at 37.2 in 2010, which has risen by 2.4 percent to stand at 38.1 as recently as 2019.

This might not be the result of aging Baby Boomers alone, however, as a recent report from the Centers for Disease Control and Prevention would indicate a declining birth-rate for the U.S. in recent years. According to the report, the birth-rate in the United States hit a thirty-four-year low in 2019, the fifth consecutive year this rate fell, which was the lowest number of births observed in the nation since 1985.

More locally, the median age in the state of Michigan has gradually inched up from 39 in 2010 to stand at 39.7 as recently as 2019. This represents a median age growth of 0.7 for the state, reflecting a growth rate of 1.8 percent, which stood slightly below the rate of growth observed nationally over the relevant period.

Not unlike other parts of the country, the median ages of West Michigan’s thirteen counties vary substantially. While urban areas are typically associated with lower median ages, rural areas trend toward higher median age values. In 2019, the median ages of West Michigan counties varied from a low of 35.2 in Ottawa County, which was the 6th youngest county in Michigan, to a high of 53.2 in Lake County — which ranked in as the 8th oldest county across the state. 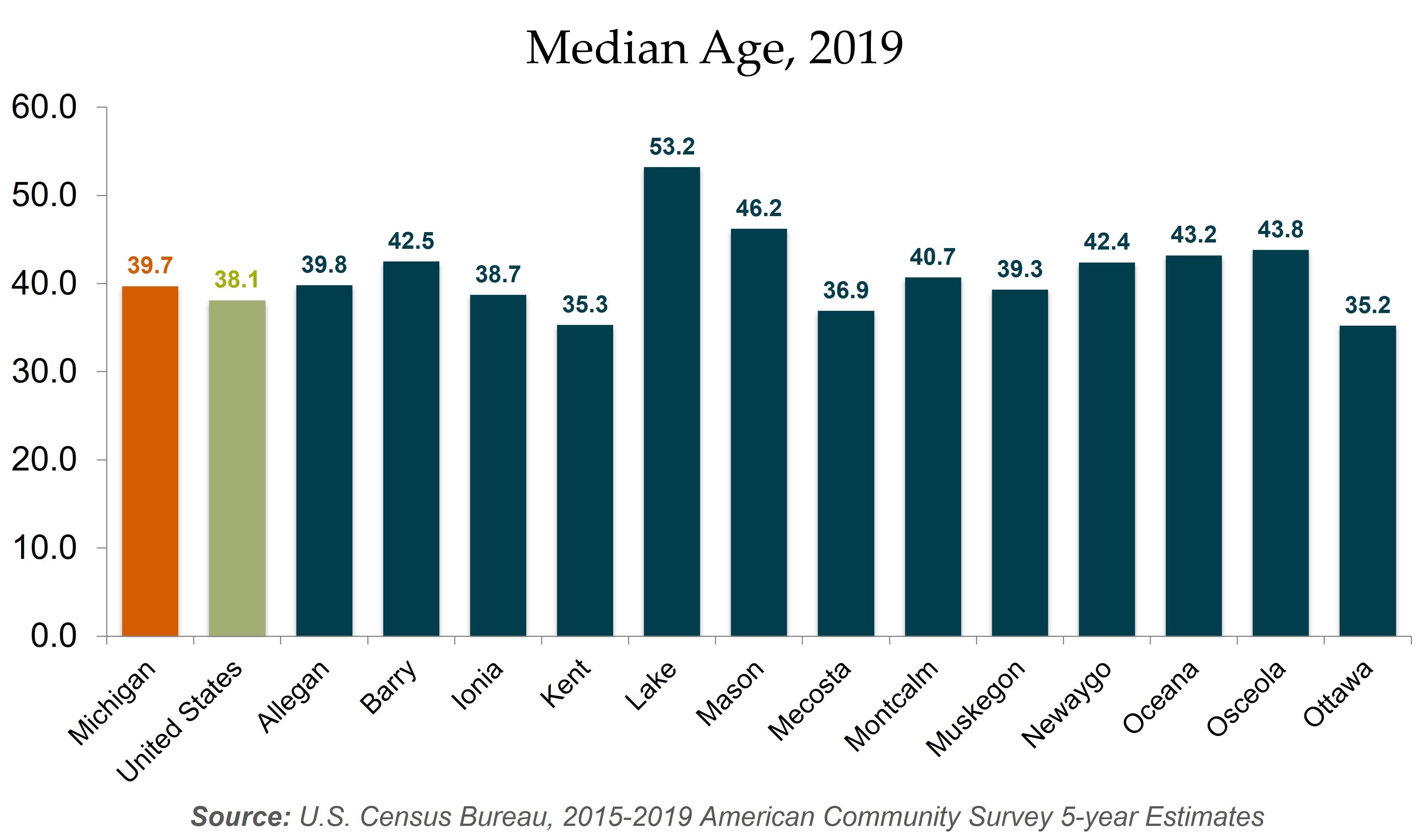 Eight of the thirteen counties in our region yielded a median age value that was older than the statewide median age of 39.7, with the median age in Ottawa (35.2), Kent (35.3), Mecosta (36.9), Ionia (38.7), and Muskegon Counties (39.3) maintaining their position below the statewide median. Additionally, several counties in West Michigan have seen a dramatic increase in their median age over the duration from 2010 to 2019, led by Lake (+2.9), Mecosta (+2.9), and Osceola Counties (+2). Each of these counties experienced a spike to their median age of at least 2 years over the course of this nine-year timespan, which significantly outpaced the jump of 1 year or below observed for Mason (+1), Muskegon (+1), Kent (+0.8), Ottawa (+0.7), and Allegan Counties (+0.6) over the same time period.