At the onset of the pandemic the unemployment rate across the state skyrocketed to achieve a historic high of 23.6 percent — the highest jobless rate seen for Michigan since at least 1976 (as far back as comparable records extend) — and fell to 8.2 percent as recently as September. The 0.7 percentage point recovery to the state’s unemployment rate that occurred from August to September reflects an over-the-month drop of 26,000 employed residents, which was the first month employment fell since March. Employment counts across the state remain 295,000 below counts recorded in February, a negative growth rate of 6.2 percent. The number of unemployed residents in Michigan fell by 39,000 over-the-month, which was the smallest monthly decrease observed since the onset of the pandemic. Although the size of the unemployed population in Michigan is currently over twice as large as February, it is a far cry from the record-high of 1.1 million unemployed recorded in April.

April’s unemployment rate of 23.0 percent was also a historic high for West Michigan, reflecting a spike of 20.1 percentage points from the rate of 2.9 percent recorded in March, though the region’s jobless rate has since fallen to 6.7 percent in September — outpacing the rate of recovery observed both statewide and nationally. This resulted from an over-the-month employment loss of 11,033 (-1.4%), while the number unemployed dropped by 9,499 (-14.6%) from August to September to achieve a total of 55,553 jobseekers — which remains over twice as large as estimates from February. The region’s labor force lost over 20,000 participants over-the-month and employment fell by over 1,500 compared to unemployment, indicating that West Michigan’s shrinking unemployment rate observed in September resulted predominately from increased labor force separations rather than jobseekers finding full-time employment.

Nonfarm payroll jobs in West Michigan grew by 5,400 from August to September, signaling the fifth month of positive growth for the region since the pandemic-imposed state lockdown in March. However, September’s job growth rate of 0.9 percent was just half the rate of 1.8 percent observed from July to August — suggesting that recovery in West Michigan is stagnating, considering that a majority of furloughed workers have been recalled to work and expanded unemployment benefits have long since expired. Job growth over-the-month was concentrated among Service-providing industries, which recovered 6,400 jobs (+1.5%), while Goods-producing industries lost 1,000 jobs (-0.7%). The largest over-the-month job gains were concentrated among Government (+7.6%; +3,800 jobs), Professional and Business Services (+3.7%; +2,600 jobs), and Education and Health Services (+2.4%; +2,300 jobs). Conversely, seven sectors in West Michigan experienced job loss in September, led by Leisure and Hospitality (-2.5%; -1,200 jobs), Retail Trade (-1.3%; -700 jobs), Mining, Logging, and Construction (-1.0%; -300 jobs), Trade, Transportation, and Utilities (-0.9%, -900 jobs), and Manufacturing (-0.6%; -700 jobs). 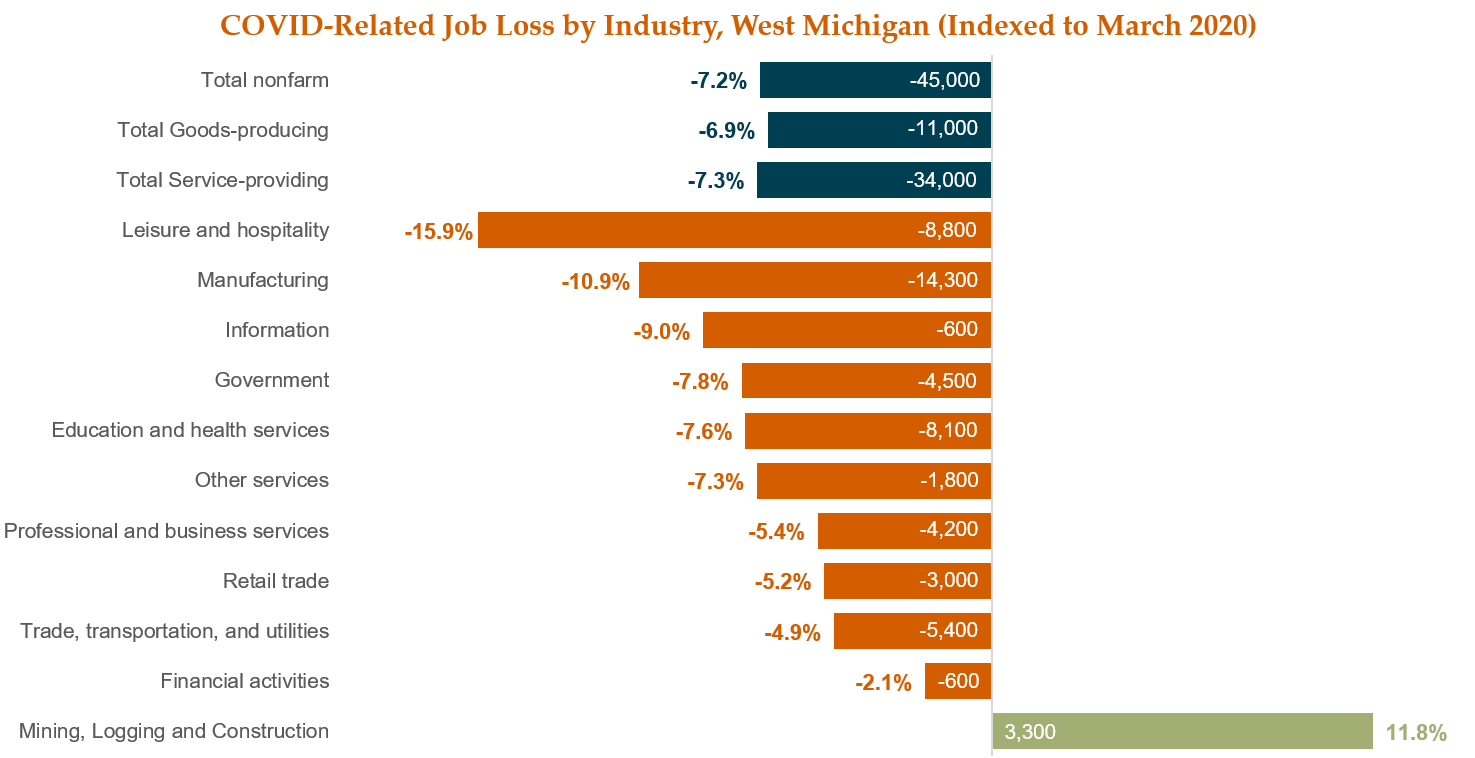 Although nearly all West Michigan industries have shown evidence of recovery since March, total regional job counts remain 45,000 (-7.2%) below the counts recorded before the pandemic, with significant variations across industries and sectors. Goods-producing industries have lost roughly 11,000 jobs since the onset of the pandemic, a growth rate of -6.9 percent, while Service-providing industries have lost 45,000 (-7.3%). Pandemic-related job losses were especially pronounced among Leisure and Hospitality — which has lost nearly 16 percent of its workforce since March (-8,800 jobs) — and Manufacturing, which currently has 14,300 fewer jobs (-10.9%). As of September, Mining, Logging, and Construction remained the only industry in West Michigan to employ more workers following the lockdown than before it, gaining 3,300 jobs (+11.8%) since March. Although it would appear that jobs are beginning to shed in this highly seasonal sector as we head into colder weather, as job counts have fallen by 300 compared to last month.