This week marks the release of Talent 2025’s seventh annual talent demand report, the Q4 2020 Labor Market Report, which is the first quarterly report in the series being released this year. The report is a critical component of our effort to catalyze and align the talent system here in West Michigan, in order to meet the current and future needs of employers by providing actionable talent demand data and analysis for stakeholders throughout the region’s talent system. The report contains a more comprehensive analysis of the various economic indicators found below, which will be updated to reflect data from the first quarter of 2021 as more information becomes available over the coming weeks. 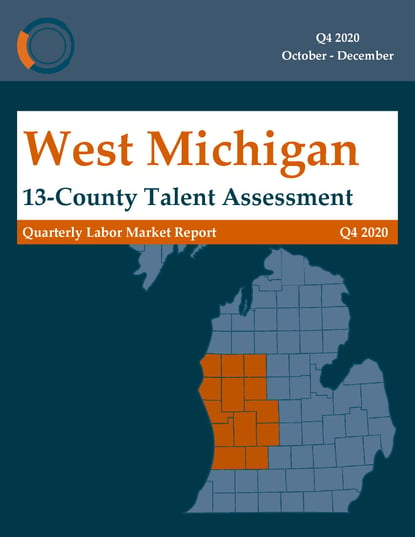 The labor market remains in a constant state of fluctuation as employers continue to respond and adapt to the COVID-19 pandemic, resulting in growing uncertainty among educators and jobseekers regarding in-demand occupations and competencies. Our annual West Michigan Talent Assessment and Outlook report remains a crucial component of Talent 2025’s effort to catalyze and align the talent system in West Michigan. But now, more than ever before, timely and reliable data and analysis on the current and forecasted talent needs of the regions’ employers is critical to achieving our goal while helping stakeholders navigate these ever-changing conditions. This is why we’ve forgone the annual version of our talent demand report in lieu of a more timely, quarterly report highlighting trends as they emerge in our regional labor market.

The current state of West Michigan’s labor market and the demands of employers looks dramatically different from the release of our inaugural talent demand report in 2014. Today, regional unemployment stands at just over 5.6 percent, well below that of the state and nation. Although this remains higher than the historic low of 2.9 percent observed for the region before the onset of the pandemic, it is a significant improvement from the all-time high of 23.0 percent observed just a year ago. Despite a larger pool of available talent, a majority of employers still report difficulty finding talent to meet their needs and nearly half of jobseekers feel they lack the skills to qualify for available jobs.

In the fourth quarter of 2020, West Michigan’s labor force and unemployment rate continued to shrink as employment showed the first signs of recovery since the onset of the pandemic. The size of the unemployed population fell by 14.5 percent (7,829 jobseekers) from the third quarter of 2020, resulting in 2,895 fewer labor force participants and 4,935 more employed. The unemployment rate in the region continued to fall by 0.9 percent over the quarter to achieve a rate of 5.6 percent in Q4, which stood below both the statewide (7.6%) and national rates (6.5%). Employer demand continued to gain momentum across all major industries and occupational groups over the quarter, with online job ads in West Michigan growing by 5.7 percent from Q3 to achieve a total of 46,454.

Compared to its peak during the fourth quarter of 2019, the labor force in West Michigan decreased by 3,524 participants (-0.4%) over the year to stand at just over 824,000 in the fourth quarter of 2020. Employment fell by an even greater amount, with 27,776 fewer workers in Q4 2020 (-3.4%) compared to Q4 2019. The size of the unemployed population swelled by 45 percent from last year, with 24,251 more jobseekers in Q4 2020, for a total unemployed population of over 46,000. The combination of a shrinking labor force and growing unemployment resulted in a 3-percentage point increase to the unemployment rate over the year, which stood at 5.6 percent in West Michigan. Employer Demand also grew over the year, with a slight increase (1.4%) in the number of job ads posted in in the fourth quarter of 2020 compared to Q4 2019.

Nonfarm employment in West Michigan fell by 8.4 percent year over year, reflecting 53,467 fewer employed in the fourth quarter of 2020 compared to Q4 2019. Although Goods-producing and Service-providing industries both lost 8.4 percent of their workforces over the year, 3 in 4 displaced jobs originated from Service-providing industries — which employed 40,067 fewer workers in compared to this time in 2019. The largest loss was attributed to Leisure and Hospitality, which employed 14,800 fewer workers in Q4 2020 (-26.1%), trailed by Information (-14.2%) and Manufacturing (-10.9%).

Educational attainment in West Michigan continued to move in a positive direction, with 60.5 percent of adults (ages 25+) possessing some form of education beyond high school in 2019. According to these estimates, 9.1 percent of the adult population in West Michigan did not have a high school diploma or GED — accounting for over 96,000 adults. These individuals face enormous barriers to gaining and sustaining employment, which have only been exacerbated since the COVID-19 pandemic. Accelerated trends in remote work, e-commerce, and automation/AI are drastically shrinking the volume of low-skill jobs available across the nation, accelerating the need to reskill workforces at scale to cope with increasing demand for new technical and social-emotional skills and declining demand for activities requiring mainly physical, manual, and basic cognitive skills.