This week we released our first quarterly labor market report of the year, which spans the fourth quarter of 2021. These reports play an integral role in our effort to catalyze and align the talent system in West Michigan, with the provision of actionable data and analysis on in-demand occupations and the state of the labor market serving as a key component to inform and guide workforce development efforts throughout the region. The report contains a more in-depth analysis of the various economic indicators found below, which have been updated to reflect the latest data from the 2020 American Community Survey released on March 17th. 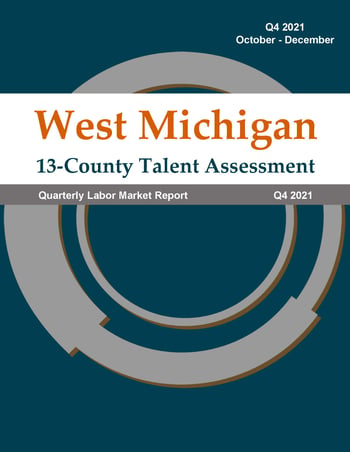 At the end of the fourth quarter of 2021, West Michigan’s labor market and the demands of employers looked dramatically different from the release of the inaugural report in 2014. Regional unemployment stood at 4.1 percent, below the state and above the nation. Although this remains higher than the historic low of 2.9 percent observed for the region before the onset of the pandemic, it marks a significant improvement from the all-time high of 23.0 percent observed in April 2020. Despite nearly twice as many jobseekers, a majority of employers still report difficulty finding talent to meet their needs. The ‘skills gap’ remains, but changing expectations among workers have also contributed to the current difficulty finding talent — requiring innovative strategies for employers to adapt to the new talent landscape.

West Michigan experienced continued population growth over the year, adding almost 13,000 new residents to bring the population of the region to 1,626,731 in 2020 — a 16.1 percent share of the statewide population — although this growth comes despite continued negative net migration to counties outside of the state of Michigan. Aging of the residential population and out-migration of young, educated talent continue to pose workforce challenges for the region and state. Over 1 in 4 West Michigan residents were aged 55 or older, equating to 28.9 percent of the residential population, while just 37.9 percent were of prime working-age (25-54). Just five counties in Michigan saw their prime-age (25-54) populations increase from 2010 to 2020, which included both Kent and Ottawa counties.

The postsecondary attainment rate of the adult (25+) population in West Michigan continued to increase in 2020, with 61.3 percent of adults possessing some form of education beyond high school. This reflects a growth of 0.9 percentage points from 2019, equating to 8,830 adults who obtained a postsecondary credential over the year. Despite continued growth, the postsecondary attainment rate in West Michigan still trails the rates seen both statewide (62.8%) and nationally (61.9%).

In 2020, 92.285 adults in the region still lacked the basic qualification of a high school diploma or GED, capturing nearly 8.6 percent of the adult population. Labor force participation also varied drastically based upon educational attainment, with just 43.3 percent of West Michigan residents without a diploma/GED working or looking for work in 2020— compared to 64.2 percent for adults in the region overall and 74.9 percent for those with a bachelors or higher.

In the fourth quarter of 2021 West Michigan’s employment situation broke its 3-month growth trajectory as more workers and jobseekers left the labor force. The unemployed population shrunk by 15.1 percent (5,865 jobseekers) from Q3 2021 while the size of the employed population fell by 4,643 workers, resulting in 10,508 fewer residents working or actively looking for work. The region’s unemployment rate continued to fall, rebounding by 0.7 percent to stand at 4.1 percent in Q4 — lower than the statewide rate (4.4%) and slightly above the national rate (3.9%). Employer demand continued to gain momentum over the quarter with online job ads growing by 7.9 percent (4,227 ads), reflecting 1.7 job openings per jobseeker in the final quarter of 2021.

The labor force in West Michigan shrunk significantly during the fourth quarter of 2021 to resemble the size seen in 2015, with over 10,500 participants exiting the workforce over the quarter and nearly 20,000 since Q4 2020. A majority of the decline observed over the year can be attributed to jobseekers halting their searches for employment, considering the volume of people looking for work has fallen by 28.2 percent (12,992) from last year. The region has also seen a decline in the number of people working, with employment falling by 6,190 (-0.8%) over the year.